We’re celebrating springtime at Elaine’s Florist with lilies, the flower that has long been associated with western civilization. Records show lilies were used for adornment and decoration as early as the sixteenth century B.C. and it is likely they were cultivated and used even earlier than that.

The lily appears several times in biblical references in the Old and New Testament, intertwining them with Judeo/Christian culture. Once a symbol for death, the lily, particularly the Easter Lily, evolved into a symbol for virtue, chastity, and purity.

In the Middle Ages, the lily began appearing in various forms of the fleur-de-lis. It became the symbol for principalities, monarchs, and other political, religious, and cultural divisions.

In the 19th century, lilies began appearing as decorations for individuals. Bouquets of the springtime flower began appearing in homes and it was a popular addition to gardens.

Today, beautiful arrangements of lilies are considered by many to symbolize hope and prosperity. These arrangements are prominently used in many churches to herald the celebration of Easter. Gardeners often plant them and apartment dwellers, or those without a green thumb, love to include an arrangement of lilies in their decorations. The beautiful fragrance of lilies, particularly of the oriental hybrid varieties, is enjoyed by countless individuals, making them an ideal gift for any occasion.

In an age-old tradition, lilies are often used at funerals and to express sympathy, but, reflecting the evolution of public perceptions about the lily, it is also popular at weddings and various celebrations. 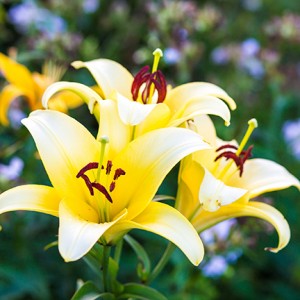 Available in a variety of colors, the best selection is generally in the springtime though florists are often able to extend their availability beyond the traditional season thanks to global horticultural access and greenhouse cultivation.

For Houston’s ideal selection of lily bouquets, as well as a dazzling assortment of other flowers, plants and gifts for business or individuals, visit http://www.elainesflorist.com or call 713-661-6788. Elaine’s Florist was voted Houston’s Best Florist by the Houston Press.